And then we were five. It all started with Sacool, a paralysed dog I saw at All about Dog when I went there for Yodas swimming therapy. Sacool was hit by a car and lives now at the Ekkamai Pet Hospital, Thonglor 55, Soi 23. I was told he doesn't have an owner, and that the clinic takes care of him. But that wan't the whole story. It turned out that a lovely woman named Khun Noy, who has 13 dogs at home, also sponsor some dogs at the Ekkamai Pet Hospital. This place is apparently known for taking care of handicapped dogs (they still call them crippled). Most of them were hit by a car and left somewhere. and they are all street dogs. Currently they have 20 dogs in care, some sponsored, some not.

After talking with Khun Noy, I got the impression that she doesn't really want to give up Sacool. That was totally fine for us, because we were just concerned about his well being. Know he has a sponsor and someone who regularly visits him was good enough. But no animal shelter in the world would let two foreigners leave empty handed, and so the staff showed us Puna. Her name given by the staff was Noo Dang, Small Rat, but we decided to rename her - to be in line with Pimmy, Pixie and Pipa.

Punas story, as told by the doctors is, that she was hit by a car during the red shirt protests at Ratchathewi, and left untreated. Someone finally brought her to the Pet Hospital, and she is there since. She is about 5-6 years old and a Thai mix. They neutered her and gave vaccines, but for some reason never made an x-ray of her leg. It is broken above the wrist, the paw is totally numb. Since there is no connection between the bones, the paw is flapping around and be dragged when she is walking.

The doctors put a cast around the leg to support it, but that doesn't improve her movement much. After we picked her up, we went straight to Thonglor Pets to at least get a second opinion. Their X-Ray was broken (new appointment for Wednesday), but after removing the cast we could see, that she has a big open wound under it. She also was licking her paw a lot, so it was also open and bleeding. 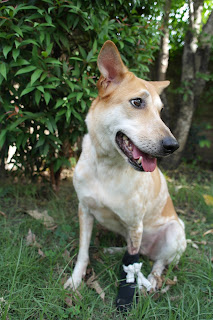 She gets antibiotics and cream now for the wounds, but will get X-ray on Wednesday. We really want to see if there is any way to get the bones together again. If not, we may have to consider to take the leg of. We saw already that with three legs she is walking fine (she had the broken leg in a sling).

What is quite important for us is that she gets along with our four other dogs. They are still adjusting each other, but very peacefully and respectful. Today they will have their first test being alone for four hours when I have Thai cla,, but I am not much concerned.
Posted by thomas at 8:56 AM