Farmers market - or what they call it

I saw it on meetup first, and then Richard Barrow reminded me about the farmers market today at K-Ville. As we eat a lot of vegetarian and healthy food, we thought it might be a good idea to see the latest developments in going green. You have to know that we are new in town, so we had no idea what K-Ville is and that it is actually located in a quite upscale area. We also didn't really know that K-Ville is mainly an expat place. So, coming from Samut Prakan, where foreigners are a minority, we were a bit shocked about the massive falang gathering. 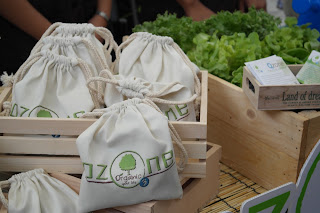 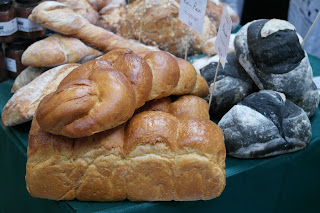 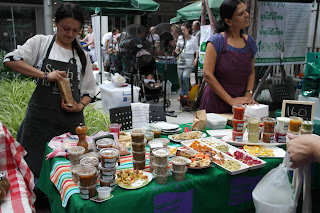 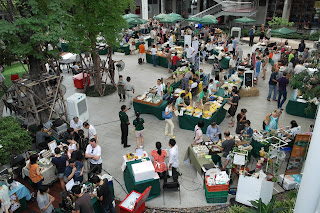 K-Ville is a small but neat shopping area, not really a mall - thats why it's called village (or ville) I guess. So, the farmers market. I was expecting a lot of vegetables, and maybe even animals. The latter was there in form of mini-pigs, just for display, not for eating.

Vegetable-wise there was some selection, but I wouldn't call it a farmers market. It was more an going-green-and-organic market. Nice breads indeed, grilled sausages (no, you can't eat them raw), some japanese rice balls, more bread, Lao coffee, jeans, organic (?) jewellery, and more stuff to eat. Everything delicious and quite expensive. But hey, it's organic, no animal were harmed during the baking of the bread, and no pesticide. At least that's what they say. You can't proof it anyway, and with the lack of independent organisations and instituts nearly everyone sells organic food now. It will get difficult soon to buy good old arsenic-and-cadmium-rich spinach.