The issue with English language skills in Thailand

First a disclaimer: I am aware of the fact that my English skills are not A+. That's why I am not calling myself an English writer. It is also not my mother tongue, so native speakers, please be nice.

Since we are in Thailand, I am wondering why the English language skills here are so low. In the regions economic hub you would expect more people speaking English, and in a famous tourist destination like Bangkok even more. But my personal experience is that very few people I met are able to have a long conversation in English. I also witnessed that many people I know actually know grammar way better than me, and may even have a larger vocabulary. Yet, they just don't speak well or enough.

As a houseman I go shopping a lot for groceries, food, whatever we need. Sometimes it seems the sellers in the small stall at the local market make way more efforts to communicate in English with me than the wannabe-models and guys at Siam Paragon. Yesterday at Central Embassy they had to call the manager on duty to explain me the promotion model in English.

There is some evidence that the English problem isn't new. In 1986, Chualalongkorn University conducted a study about the English skills of students:


So there was a warning already that a problem might occur. But it is part of the Thai tradition to ignore signs like that. So teachers went on with what they did all the years before: Speaking something they thought is correct English (or American) and focus on Grammar.

Thai students' English-language skills rank below those of youngsters in at least three other member countries of Asean, according to a recent survey by Education First (EF), an international language school
Thailand ranked 42nd out of 44 countries surveyed for adult English proficiency -- below Vietnam (39), and Indonesia (34), with Malaysia the top Asean country at No 9.
The Office of the Education Council (ONEC), which revealed the results of the survey, said the level of English proficiency of Thai youth is  below par and cannot compete with other countries.


In 2013, a conference in Chang Rai concluded that English skills are far from what they should be:

On 15th March, at Ban Mae Jan School in Chiang Rai, the Quality Learning Foundation with Rom Chatra Foundation and Ban Mae Jan School, arranged a conference to discuss preparations for ASEAN Economic Community (AEC). One of the most important factors, it was said, was that Thailand has to vastly improve where English language capabilities are concerned.


And finally, in 2014 The Nation stated that English needs to be improved:


The average TOEFL (Test of English as a Foreign Language) score in Thailand last year was among the three lowest for Asean countries, Enconcept E-Academy executive Apitha Wonlopsiri said yesterday.

He said the country's average score was 76 points (it was 74 points last year), but was still among the bottom three, which included Cambodia (69) and Laos (68).
Singapore topped the list with 98 points followed by Malaysia and Philippines (89), Indonesia (82), Myanmar (79) and Vietnam (78).
Apitha called on Thai students to urgently improve their English language skills.


I made a little experiment: I contacted randomly around 80 Thai people on Beetalk and ask if they can speak English. About 80 percent answered to a initial "Hi" with a "Hi". When I asked if they speak English, 60 percent said straight away No, and the remaining answered "A little bit". None was able to have a conversation in English. Their profession was from market seller to hair dresser, accountant, administration officer to microbiology student (the latter scored best, by the way, but still far from fluent). Age group was between 20 and 40. It also seems that older people have better skills than younger, at least when it comes to speaking.

So, the question is "Why"?
Why Are Thailand’s English-Language Skills The Lowest in South East Asia? as Tastythailand is asking.  While he says that Laos has surpassed Thailand (what I strongly reject, Laos is far behind Thailand), some arguments are very reasonable:


I totally agree with everything above and want to add some more explanations. I myself learned English in school, but 30 years ago there was no need to speak English in Germany ever. Reading yes, but speaking? No. Even movies were dubbed in German. So only when I started travelling - my now wife forced me, and I am still thankful for this - I began to speak English on our journey through Asia. So I understand the problems of young Thai people who can simply get away with it. There is no real need, unless you have to communicate in English at your work. You have movies, books, music in Thai, your friends speak Thai, and in a country with 80 million people and a still healthy economy and a huge domestic market, only a few need to talk to foreign investors and bosses.

And then there is this strange relationship with foreigners in general. While everyone likes to drive a car and uses and iPhone (both not really invented by Thais), there is still some discrimination and resentment against foreigners.

Thailand is at risk to be stuck in the middle income trap. That means the economy will plateau, and the country won't make it to an higher level. One reason is that people are just doing fine. They have a job, a car, mobile phones, a condo and the kids can go to a international school. Why should the new middle class work harder?

Since new curriculums will focus more on Thainess, Thai culture and history, I doubt English skills are about to improve significantly. And again, it is not so much how you scored in a test. If you keep silent in a business negotiation with a partner from one of the AEC countries next year. nobody cares about Thai people being shy. They will just move on to the company from Cambodia or Myanmar, where staff dares to speak.

The Solution? Radical reform in Education. More English movies, music and documentaries in TV (and less Korean). Selling English as the ASEAN language might help as well. But this takes a long time and maybe comes too late already. Or I am too pessimistic?

Posted by thomas at 2:22 PM No comments:

Romance in the modern times 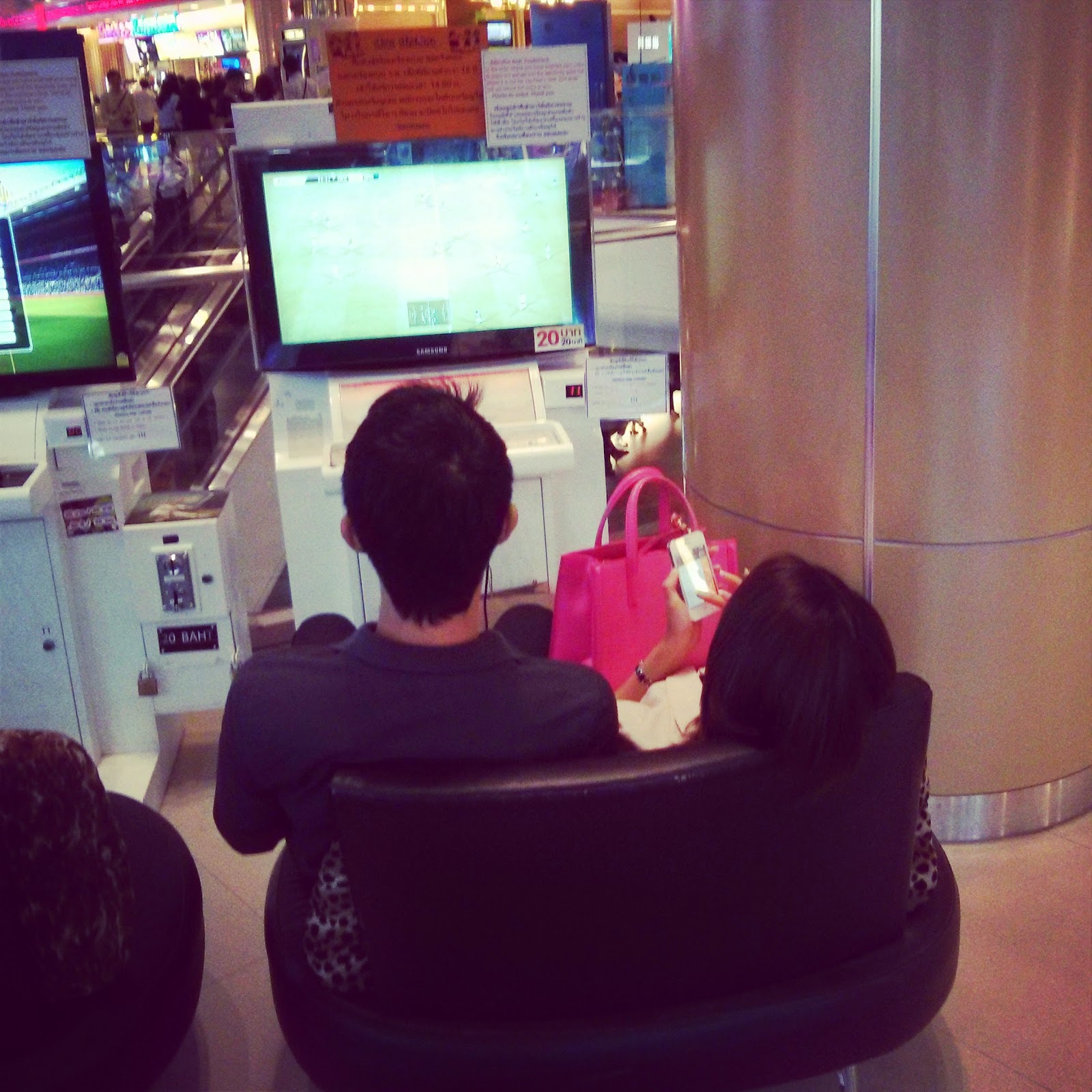 Saw this young couple sitting at Terminal 21. He was playing playstation while she was checking Facebook. Could imagine a more romantic setup for a date, but maybe this is how they do it these days?