How to change your breakfast habbits﻿

How to change your breakfast habbits﻿
Moved Permanently

I took my bicycle out to the street during the first day of Songkran here in Samrong Nuea.

How to visit 100 dogs in Bangkok: the hidden animal shelters

The life of a dog in Bangkok can be miserable. If you are born as a toy dog like a Pomeranian or Chihuahua, chances are good you will never see much daylight or feel gras under your paws. Other pet dogs may be happy if they can get out of their cage more than 10 minutes a day. And the really lucky ones get walked. 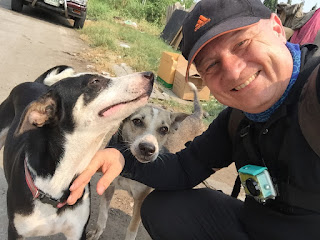 Sometimes the owners don't really want the dog anymore and then the creatures end up in kind of make shift dog shelters. Together with street dogs, who may have been injured or people found some pies and took them there. While there are shelters with some prober roofs, water supply and food, many are run by dog ladies: Older Thai women who just love dogs and keep them in their place.

Yesterday I visited two of them, left and right from Srinakarin road, just where the Highway number 9 is crossing. I went there with the doctors from 107 Bearing Pet Hospital. Khun Naridsara, Khun Supaporn and Khun Pichamon are three amazing ladies running a pet clinic. Together with some of the (also female) assistants we went to the dog places to provide some donated food and medicine.
Each place hosts about 100 dogs, all sizes ages and breeds. The first place, owned by Aunt Ket, is reasonable clean, located in a small soi off Srinakarin road. She loves the dogs that much that she doesn't want to give away a single one. 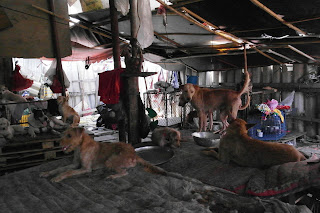 The other place wasn't that well maintained, mainly because of the limited resources. Aunt Sombun is quite poor and lives there with her daughter, her daughters boyfriend and two grandchildren. It is a classic squatter place, slum style environment, or even worst. She has also around 100 dogs there, quite a few in poor condition, mainly because diseases are spreading there. The vets gave rabies shots to a lot of them, also to protect the kids, who are sometimes bitten by the dogs.
A rabies shot costs about 100 baht while distemper is around 270 baht, so with limited money they go for rabies first. None of the dogs in both places are neutered or sterilized. The main reason is that they need to get a extended blood check first to see if the are in a condition well enough to survive a surgery. This and the fact that they will need a week of aftercare increases the costs of neutering to 4000-6000 baht per dog. 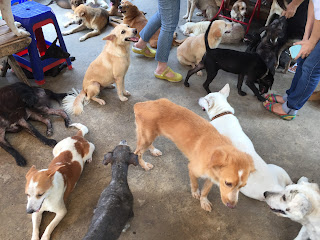 One could argue this is not a proper place for dogs and they should be handed over to government run shelters. The problem is that those shelters host thousands of dogs already and frequently running out of money. And at the end the conditions there are only slightly better. So what the vet-ladies do is collecting donations and providing them, but also trying to give advice. Yesterday they at least tried to explain to Khun Sombun she should try to separate the sick from the healthy dogs, and I explained her how to deal with an aggressive dog that bit her once (the dog is quite traumatized, because he was dropped there in a bag with legs tied together).
If you want to help those shelters, just go there and drop some food or even money. There is always someone around. If you don't speak Thai it is not much of a problem – they will understand what the dog food is for. 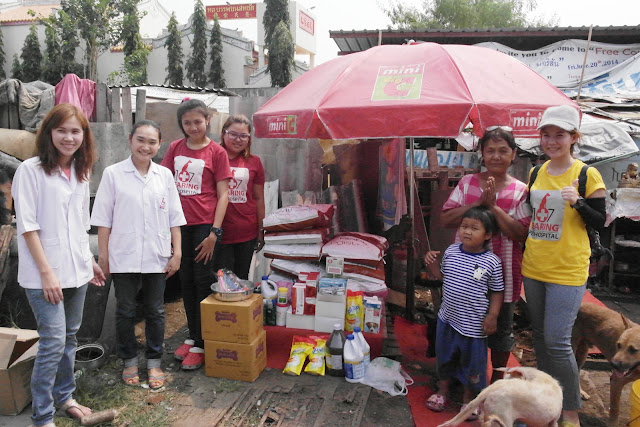 Here are the coordinates of the places:

Today I went with the vets from Bearing 107 hospital to two dog shelters at Srinakarin road,...

Today I went with the vets from Bearing 107 hospital to two dog shelters at Srinakarin road, just next to the Highway 9. We brought food and vaccine as well as some supplements and electrolyte for the dogs. Each shelter has about 100 dogs living there. The conditions are bad for western standards, but at least the first place was clean and the dogs looked quite healthy. The other place just under the highway is dirty, the dogs seem to fight a lot guessing form the wounds and many are sick. The owner isn't able to keep the sick dogs apart from the healthy ones, so diseases are spreading pretty fast. About 50 dogs got a rabies shot, to protect them and the old lady, her daugther and the little grand kids living there. ﻿
Dogshelter in Samut Prakan