I am following right now the trip Richard Barrow and others doing using a new service called Thai Bike Train. It is apparently part of the train to Ayuthaya, with 3 carriages rebuild with bike stands, as far as I understand. I think there is a huge potential for bike transport in Thailand, and recently saw a tweet by @_bm showing even a taxi with a bike rack. Even in this hot climate, Thailand isn't bad at all for biking, thanks to zillions of refrehment stalls its really manageble.
Personally I like biking, but just for the sake of fun and exercise. It seems many expats take it quite serious here and won't even come close to a bicycle without proper (and fashionable) gear. Oh, and it needs to be a branded bike for them as well.
So, let's see what comes out of this Bike Train trip. Could be something rare in Thailand: Good news for tourism.
Posted by thomas at 10:35 AM No comments:

What Facebooks knows about me in Thailand

Facebook faced a lot of criticism for it's privacy issues - and many alleged them to gather data to make us totally transparent. I don't think even the best algorithms these days can actually describe us by what we do on Facebook. Or let;'s say, they maybe can do, but there is no reason for Facebook to use it, if so.
These are the people Facebook suggested to like me: 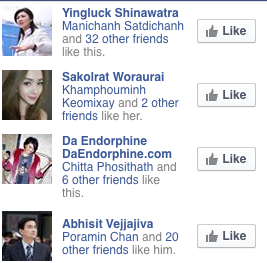 If this wasn't a "dumb" machine, it would have know that it doesn't make sense to suggest me both leaders of opposite political parties. It wouldn't suggest me a random singer. It is only suggesting it because some people I know like them, and that's enough for Facebook. It's currency is likes and engagements, and popular people likely create more likes and engagement than some niche groups or pages.

So, I am not so much concerned about what Facebook and Google do with my data. I am concerned what governments do. They are the threat. Still.

Posted by thomas at 9:21 AM No comments:

A little slum at Bangkoks east

Most people have heard about Klong Thoei, a slum in the heart of Bangkok. But this isn't the only one. Doing some research for a documentary I went to the On Nut Waste Plant community. Right behind the recycling facility is a slum where many of the factory workers live.

Wikipedia defines a slum as "A slum is a heavily populated urban informal settlement characterized by substandard housing and squalor.[1] While slums differ in size and other characteristics from country to country, most lack reliable sanitation services, supply of clean water, reliable electricity, timely law enforcement and other basic services."

The area I visited is indeed quite populated, although I couldn't get any numbers. Houses are for sure substandard, but some are actually not too bad, made of wood or even bricks. Sanitation seems to be an issue, guessing from the sewage that flows underneath the houses. Regarding clean water, there seems to be at least a water supply, and I saw in one house a filtration system installed.

I was there for about an hour, and while it is a very packed area with narrow footpaths between houses, it is cleaner than expected. We did talk to some people and were told that the land belongs to some muslim owners who charge a few hundred baht rent for the land they build there houses on. We didn't get much more into details since this will be the content of a documentary we want to make there.

Posted by thomas at 8:17 AM No comments: