While everyone may have been once in one of the 5 Star hotels in the top tourist destinations in Thailand, you may haven't taken your dog into one - mainly because there wasn't one. This time is over: Not yet finished, but soft opening is Pets' Ville, a dog boarding and entertainment place. Not too far from the airport the owners got a big plot of land and turned it into mans best friends heaven. 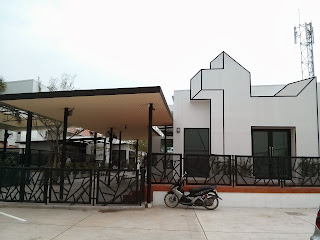 First of all, it is beautifully designed. Modern chic, cute, black and white: Teh designer did a pretty good job. The place has different sections:

a restaurant (not yet open), so you can grab a bite while watching your pet playing in the pool

a pet supply shop (under construction)

a salt water swimming pool (prices depend on weight and hair length, between 350 and 1000 Baht per hour)

a dog hotel: standard box is 1x1.2 meters, deluxe is 1.4 x 1.6 meter (for up to 2 small dogs), aircon and CCTV VIP is a 2.3 x 3 meter special hut with air conditions and IP Webcam (so the owners can see the dogs while on the beach via internet connection). Prices vary between 300 and 1000 Baht per room. Dogs are taken out 2 times in the morning and 2 times afternoon. Staff checks every two ours the animals wellbeing. 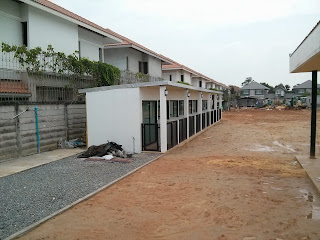 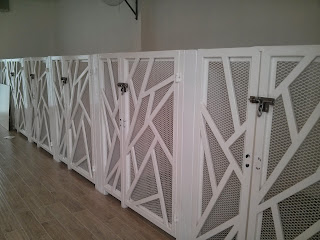 a playground with agility training (under construction)

Before boarding the dogs (service will start in November) owner recommend to bring the dog before to see if he/she likes and and gets along with the staff (they have four staff and security there all day). Also, dog owners have to bring medical records as well as last heartworm treatment date and flea/tick control prove.

Although the service isn't cheap, the place can become a community place for dog owners very soon. You can just come for grooming or the pool or even to let your dog play and run with others (for a small fee). I was impressed by the modern style, but also by the quality of building. This is all well built and constructed. 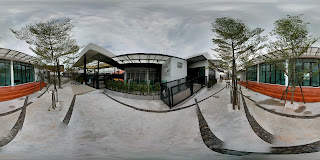 Seacon Pet Planet: The Safari or how wild animals are exploited in shopping malls

When I read an announcement about a Safari World at Seacon yesterday in the Bangkok Post, I was curious, so I just went there for the opening. The promotion area in the first floor was turned into a safari camp style arena, with a lot of huts and cages. First impression was actually quite good, well designed with explanations on every cage. But that was pretty much it.

First of all this is yet another event that makes money from the pet shops around selling mainly puppies, mice, hamsters, guinea pigs and pet supplies. So the whole event is business driven - of course, it is a shopping mall.

While I don't have much of a problem to see a snake in a cage or a turtle, I do see problems seeing a lion cub in a cage, next to a leopard cub. They are for public display, and of course fighting each other through the cages grid. I took picture when they had to use Betadin on the paw of the small leopard.

They also show a leopard baby, and for 100 baht you can hold it in your hand and give him milk. 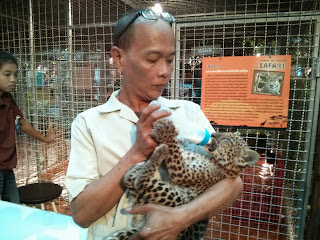 Also on display are flamingos, deers, some birds and white-faced capuchin as far as I know. In total 35 species as the Bangkok Post mentioned.

So, what is wrong with it?

First of all, I don't think that a shopping mall is a natural habitat for lions and leopards. Not even for flamingos and deers. They were already stressed before the opening, and it went worst after the first hundreds of children and parents came in, passing at around a meter distance, seperated just by the small cage bars. For the lion and the leopard there was no place to hide and rest at all.

Second, a cub is not a toy and it's not a pet. It is a wild animal and needs protection, not exploitation. It is harming those animals to be used as a photo motive.

Also, the whole thing sends a totally wrong message to young (and old people). Animals are displayed as "cute" and cute sells pretty well these days in Thailand. In particular kids will not understand that this is a protected species. They will see it as a pet. No wonder so many wild animals are kept in private zoos and houses in Thailand. And from a generation that was educated this way, we can't expect much efforts in wild life protection or even understanding of it.

So, who brought the animals in? It is the Safari Park Open Zoo and Camp Conservation Centre in Kanchanaburi Of course, everyone can use the term "conservation" in Thailand. Reality is that this is a business that exploits animals. They advertise with "the only place in the world where you can touch and take a photo with giraffes" (They haven't been much outside Thailand, I guess), and if you read comments on Trip Advisor, it gest even worst. Right-Tourism mentioned: "Part of this advertisement was a leopard, it appeared to be drugged, it was extremely docile for an animal of this size – having seen big cats in safari parks in other countries, it was on a chain, there was no water available to the animal."

I wrote an email to Seacon Square expressing my disgust about the show, but honestly I don't expect any answer.

Posted by thomas at 3:51 PM No comments:

The next days you will see a lot of yellow banners and signs with chinese style Thai characters in red. They announce the vegetarian week and let you know that this place is offering vegetarian food. I was suprised how many businesses are participating. Seacon Square for example is advertising vegetarian dishes, and when I drove along Srinakarin road, I noticed a lot of restaurants with the "เจ"-banners. Even in my street, Soi Wat Dan Samrong, I saw a sign (as shown in the picture). 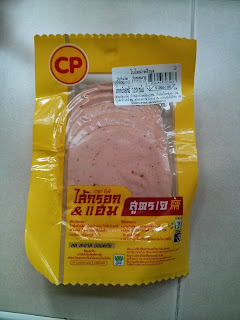 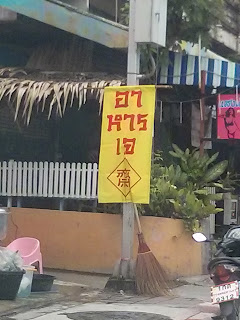 What suprised me the most was that 7/11 is participating with vegetarian dishes and even vegetarian sausages. It seems that CP (Thailands biggest producer of pork and chicken sausages) understand the opportunity and just made a special promotion with vegetarian Bologna with chilli. The taste is quite good, not much different from the pork one. On a side note: It still sounds a bit weird when the 7/11-staff is asking me if they should make it warm for me.

Richard Barrow was live-tweeting from the BTS National Stadium where the festival is celebrated as well, even with some free dishes as far as I understand.

Posted by thomas at 3:08 PM No comments:

How elephants are broken

Just a link to an excellent article about how elephants are treated in Thailand. And we are talking about the majority. Nearly all camps are like this. And by the way not much difference in Laos.