Responsibility and Daddy in the gym

It is said that people here in Asia have a problem taking responsibility. It is one of the complains I hear a lot, in particular from business people. And indeed, it seems to be difficult for some people here to take the initiative or even responsibility. The main reason is not that they don't want. It is kind of a tradition.

Most south east Asian societies are developed from a aristrocratic system. Although many call them selves a democracy, they haven't really developed a functioning civil society, where the power is in the hands of the people rather than some elite, party or families.

Thailand is no exception: You learn from the beginning not just to respect the elders, but also not to question them. You don't question your parents decisions, your teachers decisions or your bosses decision. You are taught that others make decisions for you, because they are higher in hierachy, older in age or richer. So this avoiding of decisions and questions is basically in many peoples blood.

Unfortunatley that leads to a lot of problems. One is the current political situation on Thailand, where people still blindly follow their leaders in stead of starting a process of reconiliation and re-thinking constitutional structures and procudures. But it also effects every day life. It isn't common for some to think ahead, getting a feeling for cause and impact. 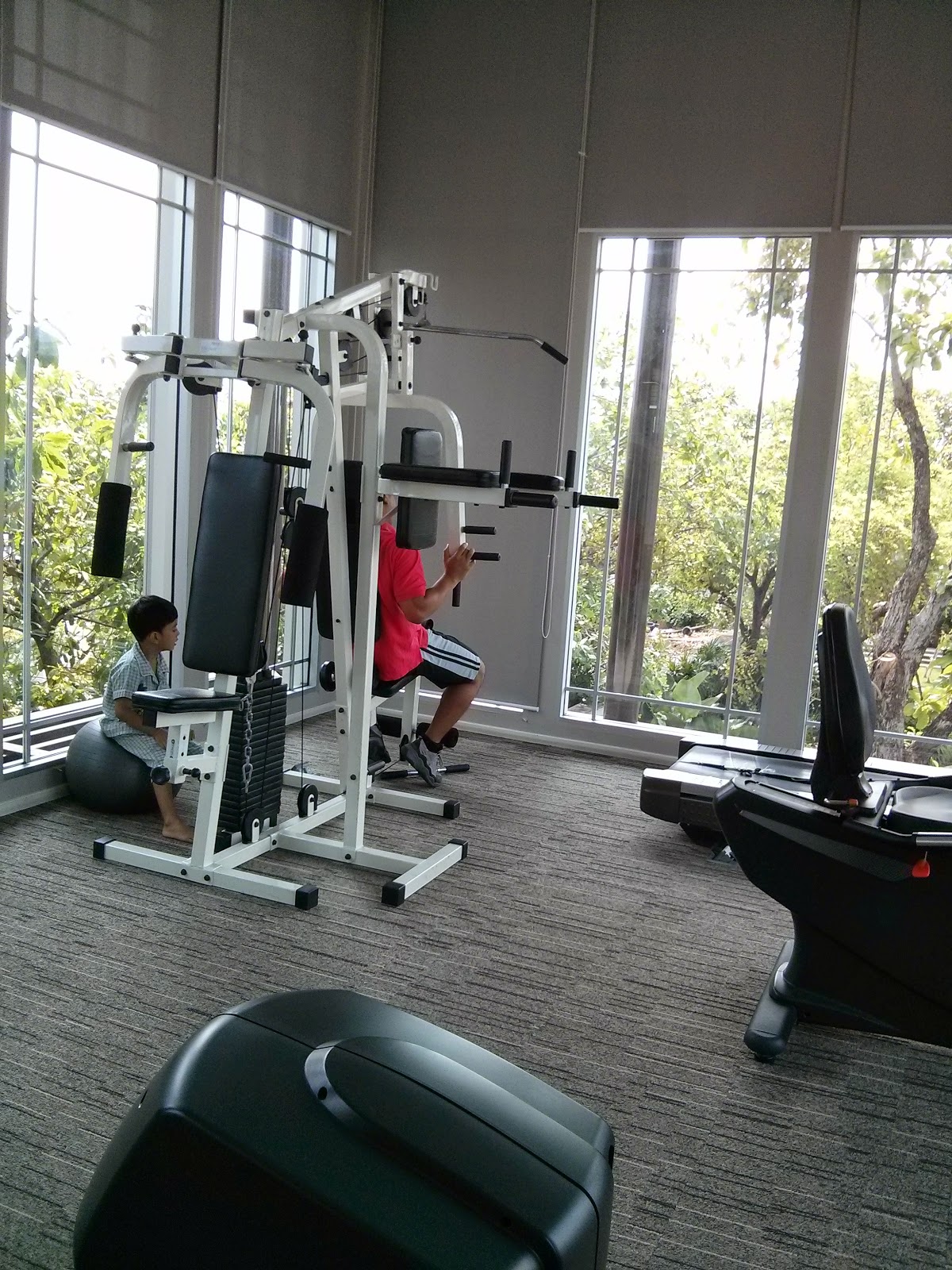 Of course, I do generalise here, and not all Thai or Asian people are the same, but some differences are just obvious. Like the guy who came into the compounds gym recently. It was this "daddy who told his wife to take care of the little boy today"- type. So he came into the gym with his 4 year old. Of course this isn't a proper playground for kids, and thats what is written on the sign as well (in Thai). But signs are seens as wall decoration (or to cover a hole), so who cares.

So Daddy had no idea what to do with his son, and decided to just go on with his exercise. First threat to his life came when he did push ups while the boy was playing with the adjustment screw on the bank. Fortunatley he wasn't strong enough to pull it out. Then "po" went to the weight lifting stand (see him  in the picture above). And while doing it, the son had fun to increase the weight sticking  the adjustment screw into different holes. He was just lucky that his Dad was strong enough and released the weight carefully - otherwise the boys hands would have been smashed.

Only because the boy got bored after a while, it ended and Daddy left the gym with his boy - maybe complaing at home how naughty the son was today.

It's just an example of what I see so many times. Families on a motobike with no helmets, wires connected with duct tape (and used in wet areas), cars barely hold together but still transporting 20 construction workers. I sometimes wonder how all the building here still stand.

There is of course some advantage. We in the west kind of lost the ability to live in the moment. Planning ahead deons't make life more fun, it actually makes it complicated. So stress is all over us. I learned to plan less ahead here. I didn't give it up, escpeially not when it comes to safety, but I am more relaxed when it comes to planning of events, for example. Sometimes things will just turn out well. Even without much planning.