Bangkok Farmers Market: You care about the salad, but why not about the dogs?

Despite the heat, the sellers and organisers of the Bangkok Farmers Market still meet regularly, mainly at the K-Village. It already became an institution, and it's growing. The market is actually a kind of expat sell and buy fair, with still some (Thai) farmers, but also a lot of stalls selling natural cosmetics (whatever that is), young Thai entrepreneurs with coffee shops and bakeries, and even a buffalo farm selling Thai made mozzarella.

It a must go for the urban expat scene, the vegans and the juicers. Actually, the products are not bad, and even reasonable priced. There is a butcher selling one of the best sausages I ever had, and a french guy offering finest baguette. I bought delicious shiitake mushrooms and organic basil for 10 Baht.

But there is also a mission. The Facebook page says:


Our mission is to connect non-gmo/organic/pesticide free producers with consumers directly and foster a vibrant community focused around Healthy Living. We support the communities in Bangkok by giving back through education, charitable works, and community programs to bring people together. Our primary goal is to help build strong foundations for communities and focus on life. Working towards sustainability for future generations and our home planet Earth.

Sounds nice. Only that's not really what they do. First of all, I do have doubts if everything what is called organic. You can basically call it organic, since there is no certification or label. But ok, people buy what they want, and if they think it's more healthy, so what. What strikes me is the way animals are treated there, and more important the message that comes with it.

They offered a pony ride for the kids. Cute, see these little horses, and you can even ride on them and they are soooo small. That is the message to kids. Animals are cute. There is zero education about animals and the way they should be handled. So you have the vegan guys next to a Pomeranian dog in a bag. This is wrong. 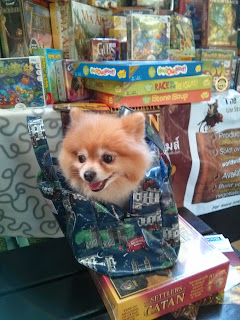 K-Village is a dog friendly place, what means you can actually take your dog around there, and they have designated dog toilet areas (although I would like to see the faces when I walk in with my pack of five street dogs). Of course, you can't bring them in a restaurant. What actually happened when I had a coffee at Gloria's: A german guy and his Asian girlfriend came in, she carrying a small dog. He told his friend it's the new baby, and despite my guess it would have to sit on the lap the next two hours, the dogs was set on the floor - where he immediately started to mark the new territory. 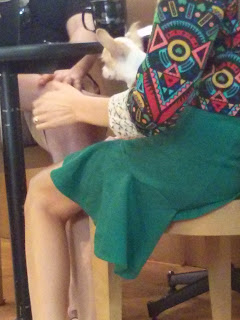 If the Bangkok Farmers Market really cares about healthy living and education, then it should not promote dogs or any other animals as toys. They once had some animal rescue organisation there with soi dogs, but this time they had a dog in a bag on display next to board games. 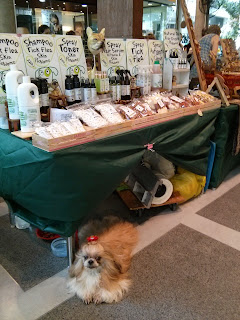