Protests continue in the streets of Bangkok

It is getting a bit confusing in the City of angels. There is the Pheu Thai ruled government, that tried to get a strongly disputed amnesty bill through the institutions. Didn't come far: even before the senate started to discuss, PM Yingluck announced it will withdraw the bill. 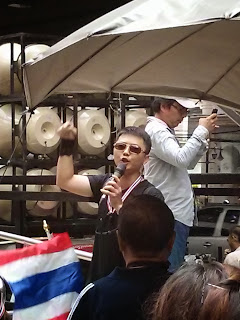 Some problems with this: The opposition doesn't believe her, and so do the protesters in the streets of Bangkok. Also, the law says that the senate has to make a decision, either making changes or reject. Then the bill goes back to the parliament, where it can't be touched for 180 days. Only then it can be withdrawn.

Maybe Yinluck thought it will stop the protests, but it didn't. Some politicians sensed a chance to get public attention and start to radicalise the movement. It is now against the government.

Meanwhile, the red shirts, until now compatriots and helpful mob for the Pheu Thai party, start to get angry as well. They didn't want to see an amnesty for their political enemies. So they also demonstrate against the bill.

The reds are still the reds, while the Democrats, formally in yellow, now use the colors of the Thai flag. The game is still the same: Redshirts are mainly from the country side, older, less educated. The current opposition gets it's support from the urban middle class and young people.

So far so good, demonstrations are part of a democracy and an important right. My friends in Laos and Vietnam for example do not have this right. 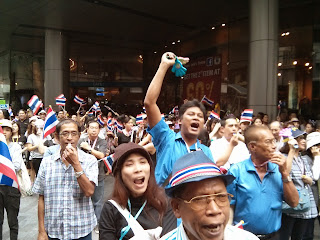 But: When - as it happened today - politicians use hate speech at these gatherings, or resign as MP to join the demonstrators, it seems there is not much trust in the institutions. I am not taking sides here, both parties have the same problem: They just want to be in power, and it seems they are not afraid about some violence.

Todays ICJ ruling that the temple of Prehar Vihear is on Cambodian land, not Thai, doesn't makes it easier. Experts expect ultra-nationalists coming out and make the situation even worst. The question is what the government will do. Nobody really thinks that Yingluck is able to manage the situation, and it is in question what Thaksin, the man behind the scenes will do.

Best case would be that eventually the government steps down and calls for elections. Worst case is that clashes in the streets of Bangkok will turn all eyes to the army.