Don't ride an elephant - but showering is ok

Last week I took a trip to Hua Hin with two friends from Germany. They asked for seeing some wildlife, but aren't the ones who have time enough to walk through the National Park for days. So I decided to pay a visit to the Wildlife Friends of Thailand Foundation. It's founder Edwin Wiek is a passionate animal lover who started the project 12 years ago. The goal is to provide shelter for rescued animals. Those animals are mainly from an human environment, like monkeys and bears hold in cages or elephants used in the begging, trekking or logging business. 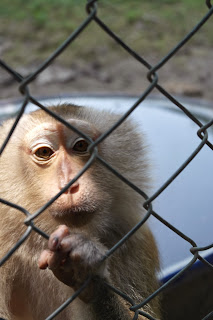 Regarding the elephants (and all other animals) the WFFT has a basic rule: Wild animals belong into the wild, not in camps or zoos. Since many of the animals held in the WFFT are mentally disturbed or not able to be re-socialized, they found a new home there and will stay on the premise forever. Some monkeys are in de-humanizing programs and can hopefully released into the wild.

On 29 hectar of land the WFFT has over 400 animals, including a salt water crocodile and some other former pets who are not species usually found in Asia.

As many expats know Thailand is a country where the powerful outrule justice, so it wasn't a surprise that one day some people involved in the wildlife trade got pissed and sent the troups to the WFFT. The legal battle is still going on.

Although the WFFT is not a Zoo, it actually provides tours, so you can get a glimpse in the animals (no touching) and learn about the work they do there. Available are half day and full day experiences, including pick up at your hotel in Cha-Am or Hua Hin, a lunch, elephant walk and shower and a guided tour.

I can only recommend to pay a visit. It changed my opinion about elephant trekking. While I was convinced that some camps do treat the animals well, I forgot that they were still tortured as babys - and the brutal training is still going on. The weight of three people doesn't really hurt the elephant much, if it's just for a few hours. But the training when they are young does, and it seems there isn't any other way available in Thailand. So please, just don't do any elephant riding and besides rescue centers don't visit any Elephant camp in Thailand. 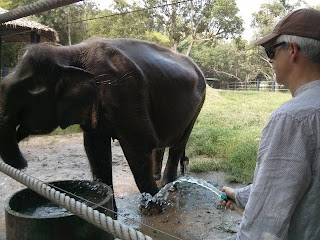