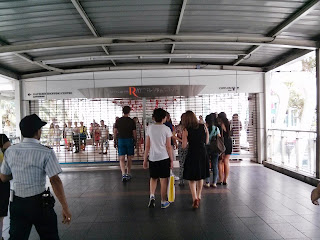 Recently we were walking on the skywalk between Central World and Chitlom when suddenly security guards showed up and pushed all pedestrians to the exits. We made it through the shutter before they pulled it down and secured the whole area. We weren't even allowed to stand near the railing to have a look whats going on down on the street.
Then, some minutes later, I realised what happens. Members of the royal family were passing by in a convoy, and while the shut down is also for security reasons, the reason we couldn't stay above the street they were driving is that nobody is allowed to be above the king or members of his family. You can see how serious this is when the prime minister is usually on her knees when attending a royal audience.