What is this Hitler thing in Thailand?

When you're from the western country, in particular from Europe or more specify from Germany then you will be quite upset seeing young people here with the Nazi Swastika on the t-shirt. One of the most popular universities in Bangkok went into a scandal when students put Hitler together with some super heroes on a poster.
The pictures you see here I took at the Thalat Rot Fai.
To think the people who are wearing the t-shirt so putting Hitler on that cars are for right or any kind of Nazis is quite wrong.
Call it a lack of education or wrong education or whatever but for some reason they think that he was at least a very strong statesman. They think he fought for his country and to be independent from the Allies UK USA and France.
A friend of mine recently tried to explain how they think. It's a little bit like we see the Chinese leader Mao Tse Tung in the west. For a while he became pop culture like on Andy Warhol's picture but he was also on t-shirts and any other kind of merchandising.
It wasn't a support what he did or even to minimize what he did it was just kind of a pop culture thing.
It seems this is what happens to Thai people. They see only a put part of it. a very strong leader of a country who serves for the purpose of the people.
Of course we know this is not the whole picture, it's actually a wrong picture and history proved it to be totally wrong. But this is what we have to explain to people wearing the Swastika or having a Hitler on their car 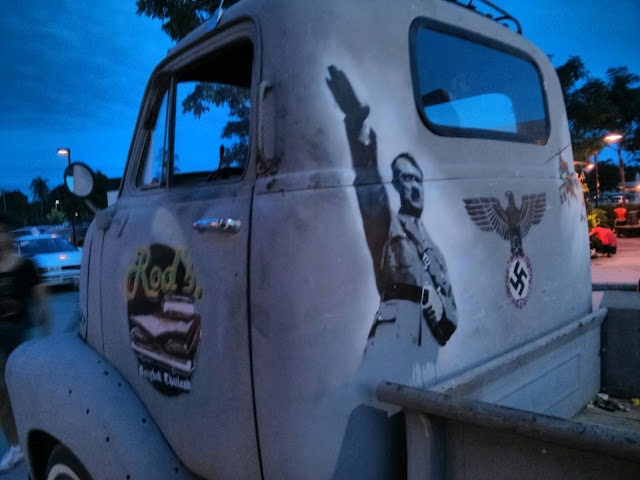