Scale down - to a foldable city bike

Last weekend thousands of expats and locals celebrated the car free day in Bangkok. Of course Bangkok wasn't car free beside the few streets the rally went on. I am not a big fan of events like this, they may give the participants a good feeling to do something for a day - but I haven't seen much sustainable impact yet (although the Bangkok governor suggested to have a car free day every month). 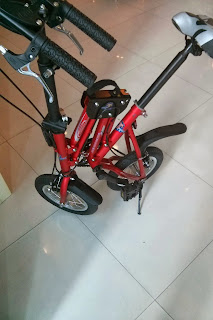 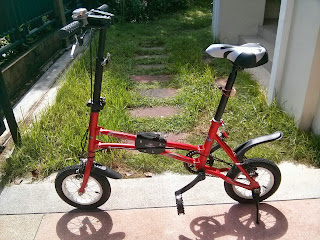 That doesn't mean I don't like bicycles. I do like them and always had one. First thing I bought in Bangkok was a bicycle. But: This city isn't just made for them. It is dangerous and risky to go with a bicycle on the main roads, since nobody cares - not even the squid seller on this 30 years old Honda Wave that is barely moving forward.

But: There is a solution I can live with. Usually I go around downtown by BTS. Only problem is that sometimes the place you want to go to isn't that close to the next station, at least its too far to walk. Motosay is one solution, but another is actually a bicycle you can carry arround. Thanks to Richard Barrow I got aware of the Bike Expo at Terminal 21, and went there on the last day yesterday. Fortunately I found a foldable city bike with 10 inch wheels for just 3900 Baht since the owner just want to clear the stock. It's weight is 13 Kilo, it's made in China (what is not these days), but the shop owner told me that he actually supervises the production of the bikes (they are branded Transfomer Bikes, of course).

So I bought it and went right on to the streets since I had a appointment at Sukhumvit Soi 6. It is easy to carry although I enjoy an escalator and fast to fold and unfold. There more traffic jam the safer I feel, and around 4 pm there is a lot of traffic jam already. The biggest advantage for the mini bike are the small Soi's. It just safes some time and is fun too.

Later I took it in the BTS during rush hour without a problem and went even to Siam Paragon. You can push it with one hand even if its folded and it just rolls easy next to you. Staff at a restaurant parked the city bike carefully next to the fridge. Another challenge was then the cinema. We want to watch Elysium (Rating: So So), and I was curious to see if I can take it with me. I could. I booked an aisle seat and had the bike right next to me (there was even space enough to have it in front of me).

I wasn't aware that these foldable minibikes are still rare, so many people were actually looking at the bike and usually I overheard "Na rak" (Cute). It's not just cute, it is practical as well. Next challenge will be Chao Phraya boat and Chinatown.